On May 15th in 2019, a top news headline on the front page of a national newspaper’s evening edition was about a new drug CAR-T (Kymriah).(1) The news article reported that the Central Social Health Insurance Council at the Ministry of Health, Labour and Welfare (MHLW) decided to cover this new drug through the Japanese Social Health Insurance (SHI) system. According to the news article, the drug will treat patients with Leukemia and Diffuse large B-cell lymphoma, and the price of this drug will be ￥33,493,407 ($304,486, calculated US$1=￥110). CAR-T became the most expensive approved drug on a per one-time use basis. The article added that the SHI would start covering the new drug from May 22nd.

When I read this article, I felt relieved and thought that my life could be extended with this new drug because I have a long medical history of fighting with diffuse large B -cell lymphoma. My lymphoma has reoccurred twice since I was diagnosed for the first time 16 years ago. If it reoccurs, I thought the next treatment option would be hematopoietic stem cell transplantation, which I heard was very tough, and sometimes patients died during these treatments. Now I might have another choice with this new treatment using CAR-T, and I felt very fortunate. On the other hand, anxiety has arisen in my mind. How much do I have to pay for this expensive drug to extend my life? If the treatment continues, can I afford it? I assumed that I was not the only one who worries about the payment of these effective but expensive drugs. There should not be a small number of people who have to give up a costly cancer treatment because they can’t afford it.

After reading this article, I started to search for other newspaper articles that focus on the payment of the new cancer drug. Soon afterward, I came across an article that reported the medical payment process.(2) The article described the story of two men who suffered from the burden of the out of pocket medical bills which they paid for their cancer treatments. One man in his 60’s decided to stop treatment with a new and expensive drug called “immune checkpoint blockade.” He ended the treatment in the middle of the term because his monthly medical payments had been around ￥100,000 even after using the system called “Catastrophic coverage.” It is a system for reimbursement within the SHI in Japan when the patients’ out of pocket medical payments pass a certain amount each month. In the article, the oncologist said that the treatment periods had become longer than they used to be for new drugs, such as molecularly-targeted drugs and immune checkpoint blockades. The oncologist further noted that it is difficult to discern when patients should cease treatments.

What is Catastrophic Coverage?

In Japan, 70% of medical costs are covered by the SHI, and 30% is paid out of pocket by patients (from 1st grade of elementary school to 69 years old and wealthy elderly)-see Table1.(3) The Catastrophic coverage system applies to patients’ out of pocket payments. When the aggregate amount of payment which patients pay at hospitals or pharmacies in one month (from the beginning to the end of a calendar month) exceeds a certain amount, then payment over the threshold will be reimbursed to the patients later if they apply for the insurance. 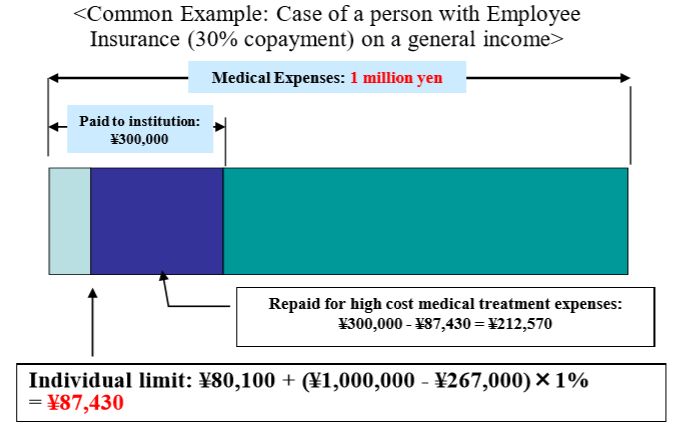 The structure of the Catastrophic coverage system is described further in Table 3 below.(5)The classification of an individual’s annual income is separated into six sections for a person over 70 years old and five sections for a person under 70 years old. As an example, let’s calculate the out of pocket payment for new drug CAR-T. If your classification of annual income is between ￥3,700,000 and ￥7,700,000, then your total payment will be ￥412,364 after you apply for the Catastrophic coverage. The calculation is as follows; ￥80,100 + (￥33,493,407－￥267,000 ) × 1%= ￥412,364.  CAR-T will be used only one time; therefore, you will finish the payment if you don’t have additional treatment or care. Revision of the Catastrophic Coverage System 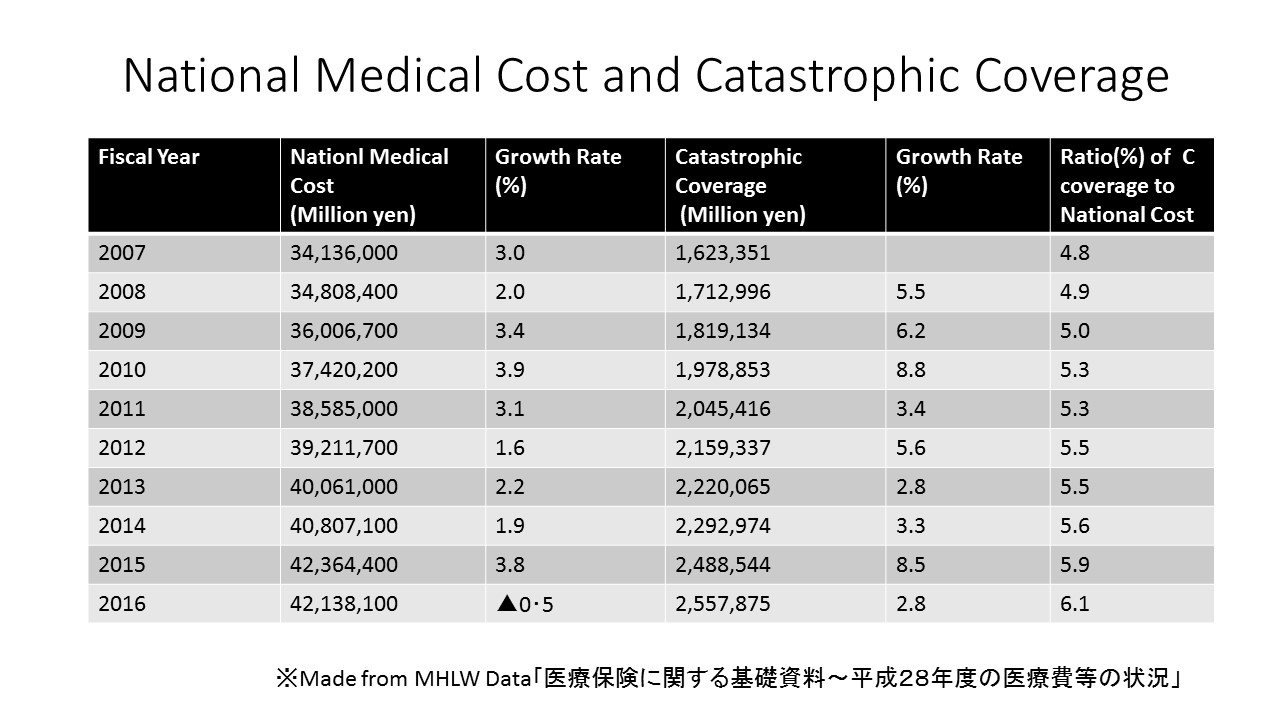 Impact of covering new expensive drugs on the finance of NHI

The National Federation of Health Insurance Societies (NFHIS), which is an association of employment-based health insurance, publishes the top 100 medical bills every year. According to a 2017 report published by this Federation,the most expensive treatment in this year was for a hemophilia patient.(12) The cost of this patient’s treatment was ￥79,157,950. Hemophilia treatments occupied the top 6 most expensive treatments in this report. The number of bills that exceeded ￥10,000,000 in 2017 was 532, which was an increase of 9.9 % from the previous year. In addition, this was the first time in which the number of cases exceeded 500. As the number of bills exceeding ￥10,000,000 was 134 in 2008, the number has increased by four times compared to 10 years ago-see Table5.

The NFHIS explained that three out of the four main reasons why the number of expensive bills has rapidly increased from 2015-2017 was to cover expensive drugs named Temcell HS in 2015, and Sebelipase Alfa Preparation in 2016, and Spinraza Intrathecal injection in 2017. These drugs apply to the treatment of graft-versus-host disease after bone hematopoietic stem cell transplantation, Lysosomal acid lipase LAL, and Spinal muscular atrophy, respectively.

In April 2018, the Health Insurance Committee of the Social Security Council in the MHLW consulted about the application of new medicine to the SHI.(13) The MHLW suggested to the committee that new medicines need to be evaluated based on their cost-effectiveness. The reason why they consulted about the medicine cost was that new and expensive drugs such as “Opzyvo” had an impact on the finance of the SHI. The MHLW explained that new drugs that have developed with the progress of genome analysis technology apply to rare diseases and that the number of patients was limited. However, a drug such as “Opzyvo” which expands target patients will impact the medical cost of the SHI. The MHLW explained that they introduced a system of revising drug prices promptly and the need to evaluate the cost-effectiveness.

Following these results, the government decided in June 2018 that they would consider the cost-effectiveness and a combination of non-insurance medical treatment at the time of covering new drugs and new medical techniques to the SHI.(14) The drug price will be revised every year from 2021, instead of once every two years.(15)

Japan has a great medical system to cover everyone. However, the total annual medical cost of the SHI is over ￥40 trillion and will continue to increase because Japan is under a rapidly aging society. The government has changed slightly the patient’s out of pocket payment, but it is not realistic to increase these fees more because if the patients can’t afford the medical payment, they will end up declining the treatment. This means that the patients may decide not to treat their disease even though medicines or medical techniques are available and covered by the SHI. It might create a social- economic disparity among people. Therefore, the government needs to evaluate cost-effectiveness when it introduces new drugs and techniques. Also, it might work if people pay a little more for a common disease that needs inexpensive drugs. Or it might be effective to introduce a system of reducing polypharmacy. In Hokkaido, a pilot project will start where a pharmacist checks the medicines patients bring from their home and decide whether the patients can still take those medicine or discard them.(16) In the United States, the pharmaceutical company producing “Kymriah” will be reimbursed only when the medicine works effectively after one month.(17) As a result, it is still possible to take measures to make the Japanese Social Health Insurance more sustainable. 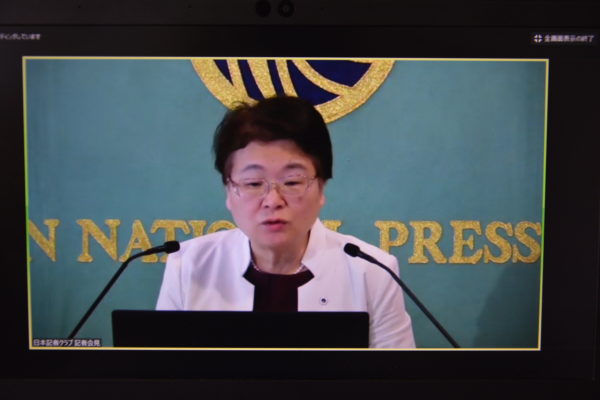